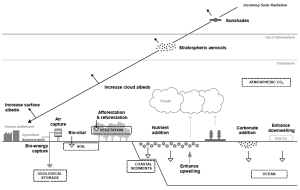 When Time Magazine included geoengineering in its “What’s Next for 2008” report it wrote that, “a few scientists are beginning to quietly raise the possibility of cooling the planet’s fever directly…as an option of last resort.” Today scientists at the University of East Anglia (UEA) are definitively smashing the hush surrounding geoengineering, publishing the first comprehensive assessment of the climate cooling potential of the various schemes being contemplated to re-engineer Earth.

“The realisation that existing efforts to mitigate the effects of human-induced climate change are proving wholly ineffectual has fuelled a resurgence of interest in geo-engineering,” explains UEA Environmental Sciences professor Tim Lenton, who wrote the report with UEA colleague Naomi Vaughan. Their report in today’s issue of the journal Atmospheric Chemistry and Physics Discussions shows that the benefits of some schemes have been exaggerated in the past by “significant” errors in calculations, but the best will likely play a constributing role in blunting climate change:

Reflecting sun away from the Earth by launching sunshades into space or injecting reflective manufactured particles into the stratosphere tops UEA’s list, showing the greatest potential to cool Earth back to pre-industrial temperatures by 2050. But not before 2100, and only when combined with serious greenhouse gas reductions.

And Lenton’s team judges stratospheric particle dispersal to also carry the most risk, because the particles would be both highly effective and short-acting. Any interruption in the particle deployment (if, for example, we fell behind on the 135,000 space launches per year required to maintain an effective sunshade) would unleash extremely rapid warming.

Next up are enhanced carbon sinks, such as burying carbon-rich charcoal (i.e. ‘bio-char’). What the New Scientist calls “burn it and bury it” in its coverage of UEA’s geoengineering rankings could cut atmospheric CO2 to pre-industrial levels. But not before 2100.  – and only when combined with strong mitigation of CO2 emissions.

Schemes that fail in this move beyond back-of-the-envelope calculations include ocean fertilizing. Phosphorus pollution from farms and laundries may already stimulate more carbon sequestration than proposed schemes to deliberately seed the ocean with iron or nitrogen. Making cities more reflective also comes up short: UEA says this may make cities more livable, but will have “minimal global effect.”

What do you think? Should we be looking for more from geoengineering?

This post was created for the Technology Review Potential Energy blog