Here’s a shot of the prototype of REpower System’s 5-megawatt (MW) offshore wind turbine, which has been generating power since 2004 in Brunsbüttel near the mouth of the Elbe River on Germany’s North Sea. I stopped to see the original REpower 5M last week while reporting an upcoming feature for IEEE Spectrum and clocked the turbine’s 126-meter diameter rotor swinging at 11 rpm, nearly full speed. The 5M marks an awesome juxtaposition, with the 120-meter high turbine (hub height) towering over Brunsbüttel’s spongy marshland, chemical complexes and a nuclear power plant.

The 5M is creating buzz these days after RWE Innogy, the renewable energy subsidiary of German utility RWE, signed a deal to install 250 of them over the next five years. At a total value of €2 billion it is the biggest deal yet for offshore wind. It also cements plans for RWE’s Nordsee 1 wind farm, which could be Germany’s first worldscale offshore farm if the first 30 5Ms are installed in 2011 as planned. Nordsee 1, about 50 kilometers offshore, could ultimately grow to 1000 MW — the same scale as large coal and nuclear-fueled thermal power plants. 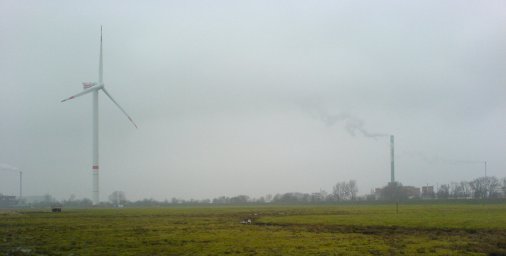