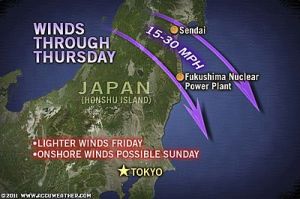 An explosion earlier today at Japan’s crippled Fukushima Daiichi nuclear power plant could indicate that the primary containment vessels protecting two of its reactors have now been breached. And yet, stunningly, that was not the day’s worst news. Instead concern increasingly focused on the plant’s highly radioactive spent fuel rods, stored in cooling pools above the reactors.

Damage sustained from last week’s massive earthquake and tsunami as well as subsequent fires and hydrogen explosions have critically limited plant operator Tokyo Electric Power’s ability to maintain cooling in several of the plants’ pools or even to replace water that is evaporating or boiling away. U.S. Nuclear Regulatory Commission chairman Gregory Jaczko told a Senate panel this afternoon that one of the pools was empty and that heating of the fuel bundles could thus melt them down—an outcome that could spread radioactive elements far beyond the site.

If the spent fuel rods do melt, there is little to nothing to keep the radioactive elements released out of the environment. Whereas Fukushima Daiichi’s reactors lie within thick steel and concrete containment vessels, the pools holding their used fuel are simply perched above the reactors, covered only by the reactor buildings’ thin concrete shell. Even that slim protection has been compromised by the hydrogen explosions, which partially or completely blew away the buildings covering the pools over several reactors.

The International Atomic Energy Agency released technical updates today stating that Japanese authorities were “particularly concerned” about the condition of the pools above reactors 3 and 4, and that pool 4–the target of Jaczko’s comments–was at 84 degrees C yesterday–way beyond the normal maximum temperature of 25 degrees C. (They had no data for today)

Japan’s Nuclear and Industrial Safety Agency issued a directive to Tokyo Electric Power this morning to “implement the injection of water” to that pool, suggesting impatience with the company’s efforts.

Pool 4 has been in the spotlight after a fire near the pool on Tuesday and another possible fire reported by Tokyo Electric this morning. If Jaczko is right, and the pool is empty, radiation levels would preclude human intervention.

Even removing the 16 feet of water that normally lies above the spent fuel would be enough to deliver a lethal dose to a plant worker standing at the railing above in 60 seconds, according to Ed Lyman, a physicist with the Union of Concerned Scientists – a longstanding nuclear safety watchdog. “That turns worker actions into suicide missions,” said Lyman in a media conference call yesterday.

Jaczko affirmed the danger. “We believe that radiation levels are extremely high, which could possibly impact the ability to take corrective measures,” said Jaczko.

Japan’s National Police Agency has devised a scheme to pump water up to the pool remotely, using a water cannon truck, according to the Tokyo-based Kyodo News Service. And the same could be required at the unit 3 pool. Japan’s Defence Ministry has considered replenishing the unit 3 pool using helicopters, made possible by the total destruction of the Reactor 3 building by Saturday’s hydrogen explosion. That plan was scrubbed due prohibitively high radiation levels detected during a test flight, according to the Kyodo report.

The consequences of failure could be catastrophic. One deadly scenario was laid out for me last night by Edward Blandford, an expert in reactor design and risk at Stanford University’s Center for International Security and Cooperation. Blandford told me (reluctantly – more on that below) that under certain conditions the metal zircaloy cladding that contains the uranium fuel could burn.

“You can have zircaloy fires that … create mobile mechanisms by which fissions products can be energized and redistributed to the atmosphere,” said Blandford. “The concern is you would generate a direct release through an active mechanism putting these aerosols into the higher elevations that can be dispersed over longer distances.”

Might ‘longer distances’ extend as far as Tokyo, 140 miles southwest of Fukushima? That, said Blandford, would depend on how much radioactive material was released and which way the prevailing winds were blowing at that moment.

According to the forecasters at State College, PA-based AccuWeather, offshore winds over Fukushima will steer  radioactive releases out to sea through at least Friday. They predict that the wind could turn this weekend, however, delivering directly onshore winds as early as Sunday.

Why was Blandford reluctant to talk about zircoloid fires? Because he thinks a zircoloid fire is a “low-likelihood event”, especially if Japanese workers maintained cooling of the spent fuel ponds.

Jaczko was less reassuring in his Senate testimony, telling panel members that unimpeded heating of the fuel rods could eventually cause the zircoloid cladding to explode, distributing radioactive fuel widely. That could immediately make conditions more difficult and dangerous at and around the Fukushima Daiichi. And if the radiation get hot enough it could disrupt all of the heroic cooling efforts underway at Fukushima, causing a domino effect as other spent fuel units and the plant’s reactors were left to melt down en masse.

Here’s to hoping that Blandford is right.