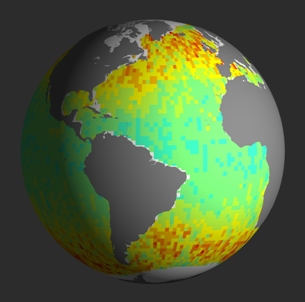 In January we reported that winds across the Northern continents were losing some of their punch, and that climate change threatened to weaken them further — altogether bad news for wind power. In stark contrast, Australian researchers report today in the journal Science that gusts are accelerating over Earth’s oceans.

Unfortunately the trend offers offshore wind power a mixed bag: stronger but also more dangerous winds. “Mean wind conditions over the oceans have only marginally increased over the last 20 years. It is the extreme conditions where there has been a larger increase,” says Ian Young, vice chancellor at the Australian National University in Canberra and principal author of today’s report.

Young and collaborators at Melbourne’s Swinburne University of Technology created a global picture of offshore wind trends by mining 23 years of nearly continuous data from satellite-based altimeters. The biggest trend they found was a stiff boost in winds gusting in the 99th percentile for wind speeds, which have been increasing over most oceans by at least three quarters of one percent per year.

Those winds pack lots of extra energy, since the energy in wind increases with the cube of its speed. But it’s extra energy that’s worse than wasted on wind turbines, which must feather their blades and shut down to avoid being damaged by extreme winds.

The Australian researchers did find a boost in mean wind speeds where offshore turbines thrive. Those increased by 5-10 percent over the past two decades.

Even that “marginal” boost for offshore wind may be ephemeral. Young’s team is confident in their satellite-based snapshot, which matches up well with measurements from ocean buoys. But they say the satellite dataset is still too short to predict whether the observed trends are here to stay.