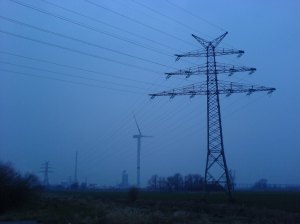 Amidst the stubbornly disappointing string of news emanating from Japan’s Fukushima Daiichi nuclear complex, there are signs that its melting nuclear fuel rods are inspiring some important and long-overdue developments in global power systems. And there’s good news for both nuclear supporters and critics.

Hopeful spinoff number one: Berlin is getting serious about upgrading the balkanized and inadequate transmission grid that represents a serious liability for Germany’s renewable energy ambitions.

Chancellor Angela Merkel’s decision last month to shut down Germany’s oldest nuclear reactors and temporarily scrub life extensions for the rest was widely seen as a sop to voters in the state of Baden-Württemberg. Well, Merkel’s Conservative Democrats lost the state to the Green Party, and she hasn’t looked back. Last week a document leaked from Germany’s Economy Ministry and reported by Bloomberg revealed plans to revamp the power grid–a precondition to replacing nuclear energy with solar, wind and other renewable power sources.

The need for action is evident. The German Energy Agency estimated in 2005 that the country needed 850 kilometers of new high-voltage lines by 2015 to absorb growing levels of wind power on its fragmented grid. So far, only 90 km have been built, and the challenge keeps growing: An updated study released in November estimated that 3,600 km of new lines have to be built by 2020/2025.

That’s because while China’s nuclear future is assured, its nuclear safety is not. China has some two dozen reactors under construction, including a domesticated and upgraded version of France’s existing light-water reactors, Westinghouse’s AP1000 advanced light water reactors, and a modular pebble-bed reactor of Chinese design.

Confronting proposals to more than double the pace of China’s nuclear construction schedule, Ganjie courageously warned an IAEA meeting in Beijing that “over-rapid expansions” could diminish reactor quality and safety. Ganjie lost that round, and China’s nuclear capacity goal for 2020, already set to jump more than four-fold to 40 gigawatts, shot up to 86 GW.

Now we’re hearing a different tune. Last week AP cited state media reporting that, “China is likely to scale back its ambitious plans … under a new policy that stresses safety instead of rapid development.” AP quoted deputy director of the China Electricity Council, Wei Zhaofeng, predicting that the policy change would trim growth by 10 GW.

That 10 GW may look small relative to China’s target, but in real terms it is a massive quantity of reactor construction. Most nuclear power proponents will count themselves lucky if the U.S. adds that much reactor capacity by 2020.