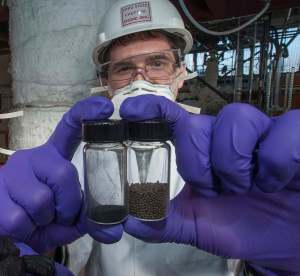 Ohio State University claims to have reached a milestone towards proving a radical new take on oxyfuel power generation that could push down the cost of zeroing out coal’s large and growing carbon footprint. Project director Liang-Shih Fan, director of OSU’s Clean Coal Research Laboratory, revealed recently that their reactor had operated for 203 continuous hours last fall and captured 99 percent of the resulting CO2.

Their run is the longest to date for a “chemical looping” reactor consuming coal, according to the U.S. Department of Energy, and in Fan’s view it means the technology is ready for testing at pilot scale.

OSU’s chemical looping reactor (the centerpiece for a $7.1 million ARPA-E project that began in 2010) is so named because it circulates its components in a continuous loop in a manner that controls the interaction of pulverized coal and oxygen to prevent ignition of the coal. “We carefully control the chemical reaction so that the coal never burns—it is consumed chemically, and the carbon dioxide is entirely contained inside the reactor,” says Fan.

Tiny iron oxide beads roughly 1.5-2 millimeters across (15-20 times larger than the coal particles) efficiently and precisely manage the oxygen supply. The beads enter the first reactor chamber oxidized and react with the particles, heating the iron oxide and releasing CO2. The CO2 bubbles up and out and is captured, while the beads flow on into a second chamber where air flow reoxygenates the beads and carries away their heat (25 kilowatts for their 25-foot-tall lab-scale reactor). The oxidized beads then loop back to start another round.

In principle OSU’s chemical looping reactor should be more efficient to operate than conventional oxyfuel reactors, which rely on power-hungry oxygen separation units for their oxygen supply. Modeling of a full-scale plant by coal-fired utility Consol Energy, a project partner, suggests that it should at least meet DOE’s goal for carbon capture technology: greater than 90 percent capture while raising the cost of coal-fired power generation by less than 35 percent.

Engineering firm Babcock & Wilson, a partner on the ARPA-E project, picked up $988,000 in DOE funding last year to design a larger, pilot scale unit test of the design.

Meanwhile Fan and his partners are already moving towards pilot-scale testing of a simplified version of their looping reactor at the U.S. Department of Energy’s National Carbon Capture Center in Wilsonville, AL. Rather than combusting pulverized coal, it will consume a blend of carbon monoxide and hydrogen — the gas stream produced when coal is gasified. OSU plans to have it running towards the end of 2013.