The world’s first wind farm employing floating turbines is taking shape 25 kilometers off the Scottish coast and expected to begin operating by the end of this year. Atmospheric scientists at the Carnegie Institution for Science argue that the ultimate destination for such floating power farms could be hundreds of kilometers out in the open ocean. Their simulations, published today in the Proceedings of the National Academy of Sciences, show that winds over the open ocean have far greater staying power than those over land. 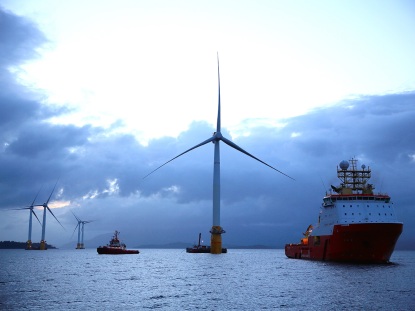 Wind power generation is obviously contingent on how fast and how often winds blow. But only over the past decade have scientists and wind farm developers recognized that the winds measured prior to erecting turbines may not endure. For one thing, dense arrays of wind turbines act as a drag on the wind, depleting local or even regional wind resources.

It is now generally accepted that drag from wind turbines in the boundary layer (where the atmosphere interacts with Earth’s surface) limits the kinetic energy that large land-based wind farms can extract to about 1.5 megawatts per square kilometer (MW/km2). “If your average turbine extracts 2-6 MW, you really need to space those turbines 2-3 kilometers apart because the atmosphere just doesn’t give you more kinetic energy to extract,” says Carnegie postdoctoral researcher Anna Possner.

What Possner and climate scientist Ken Caldeira reveal today is that the atmosphere is more generous out in the open ocean. There, they estimate, wind farms could be packed more tightly, because energy should flow down from above the boundary layer to quickly restore winds depleted by wind turbine rotors. In some regions, such as the North Atlantic, the simulations suggest that large wind farms can extract 6 MW/km2 or more.

Possner and Caldeira credit this kinetic energy recharge to cyclonic weather systems that abound over the oceans in the mid-latitudes, forming as the seas release heat into the atmosphere. Such weather can wreak havoc when they reach hurricane scale and come ashore—as Hurricane Maria has done to Puerto Rico and its power grid.

But for open ocean wind farms, those cyclonic storms should be a boon, promoting the mixing of kinetic energy between the boundary layer and the more powerful trade winds sailing over it.

When wind farms suck the energy out of the boundary layer, explains Possner, they are quickly recharged from above. “Your wind speed can regenerate a lot quicker… because the kinetic energy is replenished faster from above. You have a far greater resource to tap into,” she says.

In side-by-side simulations, the researchers packed wind turbines into large wind-rich regions in Kansas and over regions of equal size in the North Atlantic. For a massive wind farm stretching over 70,000 km2 in wind-rich Kansas, turbines could extract 0.3 to 0.4 terawatts (TW)—roughly the power consumption of the 4.4 million km2 -wide European Union—for four months of the year.

The turbines packed into a 70,000-km2 stretch of the North Atlantic, meanwhile, extracted that much power or more from September through June. Utilize 3 million km2 of open ocean and they project the turbines would meet current annual global energy demand—18 terawatts. And summer-peaking solar farms could cover any gaps, notes Possner.

In other words, there is reason to be optimistic that wind power can provide a very large share of future 100 percent renewable power systems. That is, assuming floating wind technology can be made cost-effective. As Possner puts it: “This is really a big picture theoretical study. If we can utilize this is a wholly different question.”

The closest one can find to an answer is the 30-MW floating wind park [see photo above] that Norwegian oil and gas giant Statoil is expected to start up within a few weeks in Scotland’s Buchan Deep, offshore from Peterhead. Statoil’s quintet of turbines are held aloft in the 95-129-meters-deep waters by the company’s Hywind spar buoys, which employ technology adapted from offshore drilling platforms.

Statoil’s installation may be puny compared to the 15 gigawatts of offshore wind capacity installed on fixed foundations in relatively shallow water. But the energy giant claims that it is 60 to 70 percent cheaper than the technology used on its initial pilot in 2009 and says a further cost reduction of 40 to 50 percent is “realistic for future projects.”

And some commercial-scale applications for floating turbines are already under consideration, such as the 100-turbine array proposed for 24 kilometers out from California’s Morro Bay in 2015.

Rebecca Barthelmie, a wind power expert in Cornell University’s Department Mechanical and Aerospace Engineering, says Statoil is serious about commercializing the technology. “There’s no doubt floating turbines will be cost effective in the relatively short-term—big companies don’t invest in full-scale wind farms without a great deal of confidence that this technology is near-market,” she says.

Options to bring energy ashore from open ocean wind farms, meanwhile, could include onsite hydrogen generation, notes Barthelmie. That notion was first proposed in the 1960s by University of Massachusetts wind power pioneer William Heronemus, who envisioned flotillas of turbine-equipped ships or buoys that would produce electrolytic hydrogen from seawater for shipment to shore.

If open ocean wind farms prove feasible, another set of questions raised by today’s report will beg for answers. One is whether giant wind farms in the North Atlantic will weaken output from onshore wind farms in Europe. Another is what climatic surprises massive ocean arrays might deliver.

Initial study by Possner and Caldeira suggest that North Atlantic arrays would result in cooling above the Arctic Circle; the biggest open ocean area they simulated, spanning a nearly-Greenland-sized 1.9 million km2, chilled the Arctic by as much as 13 degrees C. Is that acceptable (perhaps even desirable?) in a world whose climate is already warming and changing? Today’s authors say further study is definitely needed on that matter.

This post was created for Energywise, IEEE Spectrum’s blog about the future of energy, climate, and the smart grid