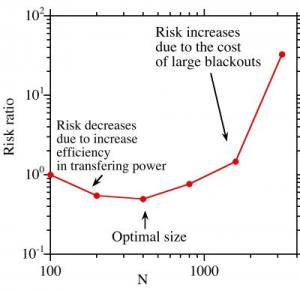 Last week a team of systems scientists known for counter-intuitive insights on power grids delivered a fresh one that questions one of the tenets of grid design: bigger grids, they argue, may not make for better grids. University of Iowa electrical engineering professor Ian Dobson and physicists David Newman and Ben Carreras make the case for optimal sizing of power grids in last week’s issue of the nonlinear sciences journal Chaos.

In a nutshell, the systems scientists use grid modeling to show that grid benefits such as frequency stabilization and power trading can be outweighed by the debilitating impacts of big blackouts. As grids grow larger, they become enablers for ever larger cascading blackouts. The Northeast Blackout of 2003 was a classic case. From a tripped line in northern Ohio, the outage cascaded in all directions to unplug more than 50 million people from western Michigan and Toronto to New York City. END_OF_DOCUMENT_TOKEN_TO_BE_REPLACED