“Public trust is at stake here, folks.” That’s how South Carolina’s top power industry regulator described the gravity of local utilities’ decision to walk away from a pair of partially-built nuclear reactors, according to Charleston’s Post and Courier. Public Service Commission chairman Swain Whitfield added that the reactors’ cancellation after $9 billion of investment — more than the state’s annual budget — “is going to shatter lives, hopes and dreams” in South Carolina. South Carolina-based Santee Cooper and SCANA’s abandonment of their pair of new reactors, announced on Monday, also have broader ramifications for the nuclear industry’s self-declared “nuclear renaissance.” The cost overruns and delays afflicting this project and a sister project in Georgia drove the reactor designer and builder Westinghouse Electric Co. into bankruptcy. Cost overruns and political concerns are also squeezing nuclear suppliers from France, South Korea, and Russia. END_OF_DOCUMENT_TOKEN_TO_BE_REPLACED

Nuclear power plants’ reactor pressure vessels —the massive steel jars that hold a nuclear plant’s fissioning fuel—face incessant abuse from their radioactive contents. And they must be built with extra toughness to withstand pressure and temperature swings during loss-of-cooling accidents like the one that struck Japan’s Fukushima nuclear power plant in 2011. But nuclear safety authorities have recently discovered weaknesses in several pressure vessels, and their contrasting responses suggest that the ultimate lessons from Fukushima are still sinking into international nuclear power culture. This is especially true in the United States, where the Nuclear Regulatory Commission is resisting calls to mandate tougher inspection of RPVs. END_OF_DOCUMENT_TOKEN_TO_BE_REPLACED

After months of negotiation, the French government has unveiled a long-awaited energy plan that is remarkably true to its election promises. The legislation’s cornerstone is the one-third reduction in the role of nuclear power that President François Hollande proposed on the campaign trail in 2012.

Under the plan, nuclear’s share of the nation’s power generation is to drop from 75 percent to 50 percent by 2025, as renewable energy’s role rises from 15 percent today to 40 percent to make up the difference. That is a dramatic statement for France, which is the world’s second largest generator of nuclear energy, after the United States. France has a globally-competitive nuclear industry led by state-owned utility Electricité de France (EDF) and nuclear technology and services giant Areva. END_OF_DOCUMENT_TOKEN_TO_BE_REPLACED

Government incentives for a pair of proposed nuclear reactors could cost U.K. taxpayers as much as £17.62 billion, thus exceeding the reactors’ projected cost. The EC figure is a preliminary estimate included in an initial report to London published on Friday by European Commission competition czars. The letter notifies the British government that—as we predicted in December—Brussels is launching a formal investigation to assess whether the subsidies violate European state aid rules.

The preliminary findings suggest that the U.K. and E.C. are on a collision source. As the Financial Times summed it up this weekend: “The severity of [the EC’s] initial concerns will cast a shadow over government hopes to win approval for the deal.”

END_OF_DOCUMENT_TOKEN_TO_BE_REPLACED

Fifty years ago this July, Électricité de France began sealing off Normandy’s La Rance estuary from the sea. After three years of work, the world’s first large-scale tidal power plant was born. The station operates still, generating up to 240 megawatts of renewable power as the twice-daily tides force water in and out of the estuary through the hydroturbines seated within its 750-meter-long seawall. But the three years of construction were tideless, which devastated La Rance’s ecosystem, killing off nearly all of its marine flora and fauna; it would take another decade for the estuary to bounce back. Due in part to that ecological hangover, La Rance would remain the only tidal station of its scale for nearly five decades …

Excerpted from the July 2013 edition of Spectrum Magazine. Get the full scoop via Spectrum. 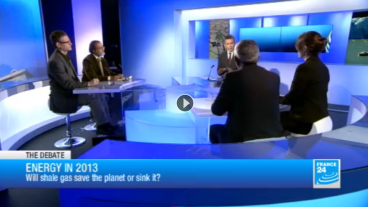 The Arctic is melting faster than predicted. Is now the time to shut down the low-carbon nuclear power plants in France — the 20th Century’s staunchest proponent of nuclear energy? Is natural gas produced via hydraulic fracturing or ‘fracking’ a gift that is buying time for a transition to renewable energy or a curse that reinforces fossil fuel dependence? Will carbon belching heavyweights such as the U.S. and China ever get serious about cleaning up their energy systems?

Such questions are top order in France, whose President kicked off a Grand Débat on energy this month END_OF_DOCUMENT_TOKEN_TO_BE_REPLACED