I’ve delivered several dispatches on carbon capture and storage (CCS) recently, including a pictorial ‘how-it-works’ feature on the world’s first commercial CCS power for Technology Review. Two aspects of CCS technology and its potential applications bear further elaboration than was possible in that short text. Most critical is a longer-term view on how capturing carbon dioxide pollution from power plants (and other industrial CO2 sources) can serve to reduce atmospheric carbon dioxide concentrations. The Intergovernmental Panel on Climate Change is looking for CCS to do much more than just zero out emission from fossil fuel-fired power plants. END_OF_DOCUMENT_TOKEN_TO_BE_REPLACED

In an intriguing footnote to their historic climate deal this month, Chinese President Xi Jinping and U.S. President Barack Obama called for demonstration of a hitherto obscure tweak to carbon capture and storage (CCS) technology — one that could simultaneously store more carbon and reduce water consumption. Such an upgrade to CCS holds obvious attraction for China, which is the world’s top carbon polluter and also faces severe water deficits, especially in the coal-rich north and west. Obama and Xi pledged joint funding for a project that would inject 1 million tons of captured carbon dioxide deep underground, annually, and simultaneously yield approximately 1.4 million cubic meters of water. END_OF_DOCUMENT_TOKEN_TO_BE_REPLACED

European leaders shortlisted a dozen proposals to demonstrate large-scale carbon capture and storage at coal-fired power plants last month as eligible to share €900 million of the EU’s €5-billion stimulus funding package. The goal is to bring down the cost of carbon-neutral coal power — which the European Commission expects to continue to exceed the cost of conventional coal power in 2020 — and to gain more experience with underground storage of CO2.

Seven propose to capture CO2 post-combustion from the exhaust of conventional coal-fired power plants, a relatively inefficient process that nonetheless costs less up front — an attractive feature given today’s financial mess. Three are Integrated Combined Cycle Gasification or IGCC power plants that would pull CO2 out of coal-derived gases prior to combustion, akin to the U.S. FutureGen project that Bush killed and Obama may be reviving. Two more would concentrate their CO2 exhaust by burning coal in purified oxygen — the oxyfuel approach that Sweden’s Vattenfall is testing at a pilot plant in Germany.

END_OF_DOCUMENT_TOKEN_TO_BE_REPLACED

FutureGen — the carbon-neutral coal power project initiated and then killed under the Bush Administration — looks increasingly likely to be resuscitated under President Obama after proponents met with Energy Secretary Steven Chu this week. There is now good reason to take a fresh look at this proposed coal gasification power plant which integrates carbon capture and storage (CCS) from the ground up.

Those words don’t come easy for this longtime FutureGen critic. But the context has changed since FutureGen was conceived in 2003, and even since Bush Energy Secretary Samuel Bodman killed it in January of 2008. While Energywise recently noted ongoing concern over FutureGen’s cost, here are five arguments that could justify heavy federal financing:

END_OF_DOCUMENT_TOKEN_TO_BE_REPLACED

Potential Energy has learned that Energy Secretary Steven Chu met with representatives of the FutureGen Alliance today, reinforcing positive signals from Chu two weeks ago that the troubled project could be revived. The public-private partnership to prove the integration of carbon capture and storage and coal gasification technology was killed by the Bush Administration in January 2008 using what Congressional investigators have shown to be specious accounting.

In an email to TechReview today, Department of Energy press secretary Stephanie Mueller confirms that Chu and the Alliance had a “good discussion” and that the Secretary Chu “believes that the FutureGen proposal has real merit”:

Secretary Chu believes that investment in carbon capture and storage research and development is critical to meeting our energy and climate change challenges. Unfortunately, the prior Administration simply walked away from FutureGen after years of work … In the coming weeks, the Department will be working with the Alliance and members of Congress to strengthen the proposal and try to reach agreement on a path forward.

END_OF_DOCUMENT_TOKEN_TO_BE_REPLACED

Oil and gas major ConocoPhilips and coal giant Peabody Energy applied for a permit yesterday to build a plant in Muhlenberg County, Kentucky to turn coal into synthetic natural gas. What interests me are not so much the details of their project but the fact that it’s just one more example of what a longtime source of mine, Gasification Technologies Council CEO Jim Childress, calls stealth coal.

Childress uttered this colorful term while I was interviewing him on Chinese versus U.S. developments in coal gasification for power generation using integrated gasification combined cycle or IGCC technology. (‘Combined cycle’ because it uses a gas turbine to generate power from expanding combustion gases plus a steam turbine that generates power from the heat released.) My conclusion, reported today for MIT TechReview in China Closes the Clean-Coal Gap, is that climate concerns have paralyzed IGCC projects in the U.S. whereas air quality concerns are helping push Chinese projects forward.

Stealth coal figures in Childress’ argument that neglect of IGCC technology in the U.S. does not mean we’re through with generating electricity from coal. To the contrary. As utilities turn to natural gas for more and more of their baseload power generation, they will drive demand for gas beyond what drilling can deliver. Childress predicts that coal-to-gas plants such as the ConocoPhillips-Peabody Energy project will keep the gas-fired plants running:

Right now coal plants in the planning stages are stopped dead in their tracks and the default fuel is natural gas. So we’re looking at a tightening of the natural gas market and that’s good news for coal gasification. It may not go [directly] to power but it will substitute for natural gas.

To my ear the word stealth makes coal-derived synthetic gas sound kind of sinister but its climate impact could be negligible according to a University of Kentucky study cited yesterday by Green Car Congress. Visual thinkers may prefer this report by Fox News on Dakota Gasification, the synthetic gas operation that pioneered carbon capture and storage in the U.S. (I’d send you to CNN, but they just axed their entire science, environment and technology team.)

Of course, one should also consider the environmental costs of coal mining. We’ve written recently about upstream impacts of mountaintop-removal mining in Appalachia.

I’m not sure about Governor Beshear’s poll data, but one thing’s for sure: There’s nothing stealthy about his feelings for coal. 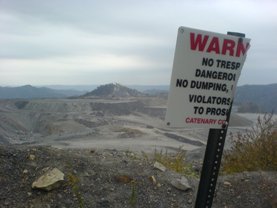 Gasification-based IGCC power plant technology offers a powerful means of cleaning up local air pollution from coal-fired power and, via carbon capture and storage, its carbon footprint. Carbon-Nation has argued in past that it should be legally mandated for new power plants burning coal because (1) air pollution laws require use of the best emissions controls available, (2) carbon capture and storage will be economically viable under emerging carbon caps and taxes, and (3) adding new carbon emissions from coal is unjustifiable given the critical need to stabilize atmospheric levels of CO2.

But let’s be clear on one thing: IGCC and carbon capture can substantially clean up the coal-fired power plant, but they can’t deliver “clean” coal. That’s because extracting coal to feed the power plants is, in itself, a dirty business — at least as it is currently practised. Last week I witnessed this firsthand at two West Virginia mines where mountains are literally dismantled to reveal their hidden coal seams, then piled back to a rough approximation of their original contours or left flat for development. I visited the mines as part of the Society of Environmental Journalists’ annual conference, held this year in the heart of coal country in Roanoke, Virginia.

Mountaintop removal mining, as this practice is called, accounts for about a third of Appalachian coal production but contributes a considerably larger share of Appalachian coal burned in power plants (conventional deep mines yield more metallurgical coal used in steel mills). They are, without question, environmentally and culturally destructive. Thousands of cubic meters of rock, sand, and soil dumped into valleys bury ephemeral stream beds; wildlife are displaced; sludge impoundments from coal-cleaning operations threaten groundwater and communities; and residents of the mountains suffer internal devestation as the lands that define their existence are blasted into oblivion. For a sense of scale check out this 5MB panorama of the mine pictured above by National Geographic executive editor Dennis Dimmick.

Can the coal industry do better? Yes. For example, reclamation experts from Virginia Tech told the tour that mountaintop mines are adopting a new reforestation approach that could restore the mountains’ ecology within two generations. That’s huge improvement over current practices where grasses and shrubs take over, leaving the land in what Virginia Tech forestry professor James Berger called a state of “arrested succession.”

Will the industry ever make coal mining socially and environmentally sustainable? Appalachian activists who have fought ‘Big Coal’ for decades doubt it. For one thing, the coal companies enjoy undivided support from state legislators and governors in coal states. That’s why West Virginia author and political activist Denise Giardina told the SEJ conference attendees that she was “rooting for global warming” to stop coal. “I think it will force us to change,” said Giardina, who made it clear that IGCC power plants sequestering CO2 weren’t the kind of change she had in mind. Quite the opposite in fact: “If we ever have clean coal,” said Giardina, “you can kiss the mountains goodbye.”

I’m going to need more time to reflect on what I saw and heard last week. The scale of carbon reductions required and developing nations’ right to develop may yet justify the ongoing use of coal. But, at the very least, it is more clearer to me than ever that cleaning up our energy systems must start with energy efficiency and less extractive forms of renewable energy. We are all, as willing users of coal-supplied power grids, contributors to Appalachia’s plight everytime we turn on the juice.

Storied author, poet and social critic Wendell Berry put that message to the SEJ conference in the bluntest of terms: “It’s awfully hard to remember when you push that button that you are authorizing mountaintop removal.”

For more on mountaintop removal mining check out this week’s article by the Associated Press which I believe was inspired by the SEJ mountaintop mining tour.