“Once again, Bob won’t get the job.” That was the definitive prediction this weekend by Automotive News, the industry’s journal of record, on GM vice chairman Robert Lutz’s chances of being named CEO [link may require subscription]. Yesterday they were proven right when GM’s acting CEO, GM chairman Ed Whitacre, announced that he would continue permanently in the position. What they got wrong, however, was why Lutz was unfit for the top job.

Automotive News let Lutz speak for himself, arguing that at 78 years old he was too “geriatric” for an ailing automaker in need of rejuvenation. That logic flies in the face of Whitacre’s logic that what GM needs most, after ousting two CEOs in 2009, is stability. After all, Lutz has served in top product development and marketing roles for GM since 2001, and previously held top jobs at Chrysler and Ford.

What makes Lutz the wrong man at the wrong time is that he rejects the intensifying concerns for sustainability that now drive automotive markets and innovation worldwide. At the Detroit Auto Show last week Lutz held forth on climate science with the Sydney Morning Herald, explaining that Earth is being cooled by a dearth of solar flares rather than warmed by greenhouse gases from cars and other fossil fuel-burners:

“All I ever say is look at the data, look at the empirical evidence…Katrina was six years ago and we have yet to have the next hurricane.” END_OF_DOCUMENT_TOKEN_TO_BE_REPLACED 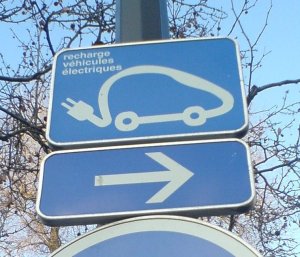 END_OF_DOCUMENT_TOKEN_TO_BE_REPLACED

Drivers use all manner of data these days to travel efficiently, and vehicles should follow their lead, according to University of Wisconsin-Milwaukee mechatronics expert Yaoyu Li. He predicts that vehicles privy to data in the latest GPS-enabled electronic navigators — which download real-time traffic data to update route suggestions on the fly — will provide substantial fuel savings in the decades to come.

An uninformed plug-in is almost certain to discharge its battery power either too quickly or too slowly. If it simply uses the battery until it is discharged, it will lack an electric option for later stop-and-go situations where running the internal combustion engine is inefficient. Alternatively, if the plug-in acts like a conventional hybrid and lives in the moment, blending its electric and gasoline energy based on the driving conditions that second, it is likely to arrive at its destination with leftover battery charge. Either way, the plug-in will have consumed more gasoline than necessary.

END_OF_DOCUMENT_TOKEN_TO_BE_REPLACED

The head of the Federal Energy Regulatory Commission (FERC) predicts that plug-in hybrid vehicles will provide immense benefit to power grid operators — enough for utilities to provide kickbacks to their customers, paying down the extra cost of a plug-in in as little as three years. Jon Wellinghoff, FERC’s acting chairman, made that comment at a Las Vegas trade show last week according to coverage by the Las Vegas Review-Journal (which I picked up on thanks to the keen newswatching eyes of specialty publication EV World).

Wellinghoff’s comments refer to plug-in hybrids equipped with the smarts to communicate with the power grid, which he termed the “Cashback Hybrid” according to the Review-Journal article:

When the Cashback is plugged in, motorists can allow the utility to vary the speed at which the battery recharges so that the utility can more closely match supply and demand for power on the electric grid…In return, the car owner could obtain cash back or a credit from the utility that makes the electricity free, he said.

END_OF_DOCUMENT_TOKEN_TO_BE_REPLACED

Electric vehicles web-journal EV World has done the English-speaking world a favor by translating an excellent Peak Lithium story written last week by Le Monde journalist Hervé Kempf. What is Peak Lithium you ask? The notion that a wholesale shift to EVs powered by lithium batteries in response to peaking petroleum production could just as quickly exhaust the global supply of lithium metal.

Kempf credits a May 2008 study by consultancy Meridian International Research — The Trouble with Lithium 2 — as the source of growing concern over peak lithium; the study concluded that reasonable increases in lithium production over the next decade will generate enough of the light, energetic metal to produce batteries for only 8 million batteries of the sort that GM plans to use in its Chevy Volt plug-in hybrid.

But he does his own homework, providing an accessible introduction to the geological distribution of lithium and its likely magnitude. I say ‘likely’ because Kempf shows that industrial secrecy makes it difficult to assess the probability of a peak lithium scenario prematurely squelching the electrification of the automobile.

As George Pichon, CEO of French metals trader Marsmétal puts it in Kempf’s piece, the world of a lithium metal is “un monde fermé.” 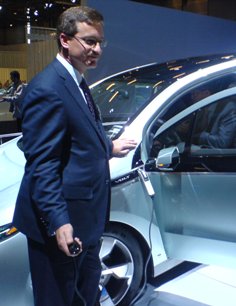 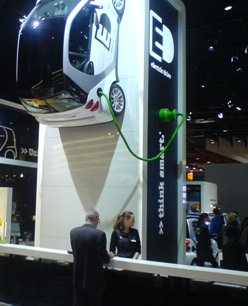 Five years ago Toyota relaunched its Prius with a Saatchi & Saatchi ad blitz with the EV-bashing tagline “and you never have to plug it in.” Toyota’s corporate marketing manager said the idea was to show the Prius was, “not an idea that’s ahead of its time.”

What a difference a few years can make. At this year’s Paris Mondial de l’Automobile, which opened to the press yesterday, plug-in hybrids and full-battery EVs are everywhere — and their plugs are displayed conspicuously.

Smart, the Daimler/Swatch joint venture, towered a dangling plug over their floorspace to highlight its development of an EV model of the tiny trendy Smart Car due out in 2010. GM executives gamely held the cord of the Chevy Volt plug-in hybrid for photographers. And check out the plug on Ligier Automobiles’ EV city car!

Frank Weber, GM’s Global Vehicle Line Executive for the Volt, explained the shift to me in dollars and cents, or rather euros and centimes. “If you say that the charge costs less than a euro per day, it’s that simple,” says Weber. “Plugging in means saving, being able to drive and don’t watch the signs at the gas station. This is what the plug means. It’s now looked at as an opportunity and like, well ok at night you have to plug it in but you would do this anytime because the moment you plug it in you know that you save.”